Talking about lenses is a pretty dry business and of course testing and trying lenses is a time consuming process but there’s absolutely no point in any of this unless it leads to better or different pictures.

I suppose I’m like a lot of photographers who get fed up with people saying, ‘Ah you must have a good camera’ or ‘Your camera takes good pictures’.

My approach to what you might call the technical side of photography is rather practical. A lot of my photos are taken for editorial or stock use and so I have to meet the standards of the client. For my own personal pleasure I’m happy to use old cameras, pinhole cameras and also practise some types of non camera photography.

Now going on with trying out new lenses I was talking about ‘thinking digital’ and these two concepts combined for me a lot when I decided to cover the Rose Festival in Kazunluk. I’ve spoken about this before but as I live in Bulgaria and I’m a stock photographer, I like to return again and again to the same places and build up a collection of images which enables me to provide a good coverage of an area or an event.

One of the things I like to do is to attend festivals. Now this particular festival celebrates roses and the rose industry and is mainly a one day event with a few days before and after with some associated activities.

Because so much depends on a single day I’ve found it’s worth planning ahead and thinking digitally.

I also decided this year to try out my new lenses and particularly my Canon 100mm macro lens in its secondary role as a telephoto lens. This is something that macro lenses are extremely good for, having fast focusing, the ability to cover distances from a few inches to infinity and having a wide aperture is a great help.

Shooting with prime lenses is rather different than using zooms. For me I suppose the main point is that you have to think in advance of how big an image you want in your viewfinder before you press the button.

With a zoom lens you can stand in one position and simply zoom in or out to make the image larger or smaller.

This smallness in the frame is one of the first points in thinking digital because it’s fairly obvious that moving from, in my case, medium 6×6 format to an 8.5 megapixel digital camera creates a few differences and difficulties.

So even the best modern digital cameras can’t produce the image size of film cameras. They do have different characteristics but it’s quite difficult to get a good quality, large image. So what can we do about it? How can we get larger images without interpolation?

I’d like to focus on two approaches and one of them takes me back to my old black and white days because one of the advantages of digital is that the photographer has a great deal of control so various things can be done.

One obvious approach to thinking digitally is to create a library of images for use in other images. A common example is skies. Like many photographers I shoot a lot skies. One glory of digital is that the number of pictures is limited only by your memory card and storage. You can immediately check the exposure and erase images that are not good enough. This means that you can build up a large library of skies, backgrounds, textures and detailed images which you can incorporate into you final images.

This idea of incorporating bits into an image can lead to a great deal of controversy because a lot of people believe that the camera cannot – or perhaps should not, lie. Somehow a photograph is reality.

This doesn’t have to be dishonest or deceitful. Few people looking at Man Ray’s photo of an iron with pointed screws coming from the sole plate would think that it was ‘real’. They might of course believe that the image was not created by photographic manipulation or montage but by making a model first.

The problem arises mainly when images are produced which do not give any clues as to how they were created and yet are in fact created by using manipulative techniques. For example a photographer might take a picture of a flower in a studio and then cut it out and place it on a sky background.

Is there anything wrong with this? Not at all in my opinion. As I say it’s exactly what I used to do in my black and white days. I had a book which was my bible at the time on Printing by Pearlman and would shade and dodge and burn and replace skies. Skies are a particular bugbear for black and white photographers because of the difficulty in getting a correct tonal range when using film.

Sometimes I would cut out images from other photos, sandpaper the edges of the photo paper to make the joins less apparent, stick the image down with rubber solution and then rephotograph the result.

I would also use double exposures and other in camera techniques to manipulate the images.

Using modern digital techniques this approach is much easier if you have the technical knowledge but it’s nothing new.

With this freedom comes responsibility. I think it’s quite wrong for example to have ‘news’ photographs where relevant information has been radically altered and still try to pass them off as ‘real’ or ‘true’.

In my own work I always clearly label in my captioning or description where I believe I have digitally manipulated the images.

This can be a bit of a problem.

Most digital photographers who post process pictures in an imaging programme will apply certain basic corrections using levels or curves or just hitting the autocorrect button.

Doing that changes the image? My view is that calling an image digitally altered or enhanced goes beyond these basic changes.

Among the changes I have in mind are making mirror images, creating reflections with or without specialist software programmes, inserting moons into night scenes and so on.

I’m going to give a few examples right here using some of my most successful manipulated pictures.

My first example dates from my pre-digital days and was produced entirely in-camera using a Cokin Mask attachment.

For this photo I photographed the grapefruit for the first exposure on a red background using a yellow filter. For the second photo I took a picture of my girlfriend’s eye. I used the yellow filter so that the human flesh and the grapefruit would blend together better This is the final result. 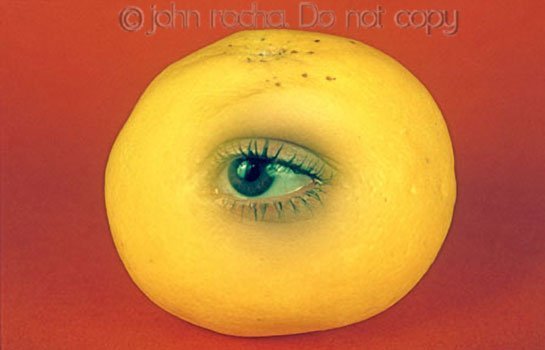 My next photo was taken using both film and digital cameras and the images were many years apart.

Cycling through the attractive countryside of Canton Berne in Switzerland very early one morning I passed a cafe which had not opened yet. It’s distinctive red topped tables were still folded down and provided a compelling image which had some success in photo magazines at the time.

I also took close ups of one table and over the years I have scanned this image, masked it, cut it out and combined it with other images for different effects to create many different versions.

This version combines one table top which had been replicated many times, with a sky image from Bulgaria and the shadow of park chair in England.

One outcome of this technique is that the final image is much bigger than each original and so provides a large high quality image.

Clearly these images are not ‘real’ or ‘true’ but hopefully without being pretentious I’d like to take an artist’s freedom to render what I ‘see’ in my mind.

So back to the completely digital days of this year’s Rose Festival in Kuzunluk.

This was the second time for me. I had anticipated some problems but there were some I didn’t think of in advance.

For example I might be wrong but I think that the first time a few years ago the actual picking of the roses was quite early in the morning starting before 9 o’clock.

This time looking at the programme I found it would be from 10 o’clock onwards and this meant that it would fall into that dreaded time of day when for many photographers no photography is possible! That is. midday, when the harsh light of the bright sun high in the sky makes some types of photography difficult.

One of my solution was like this. I went out in the evening the day before the picking and in the softer evening light photographed some of the dancers and other festival characters in the city square. Many of these people were relaxed and expecting to be photographed so I took some pictures of them here.

Here is a picture of one of the young folk dancers in the flattering evening light. 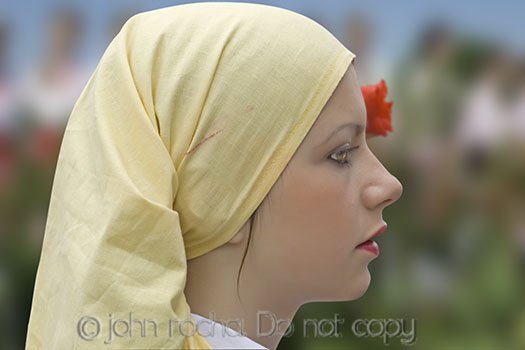 Folk Dancer with a Yellow Scarf

One further step was to photographs details, especially eyes, simply with a view to using them in my midday images to replace the dark, harshly shadowed eyes with the much more attractive images from the evening before.

Here is a example of a masked street dancer before and after. 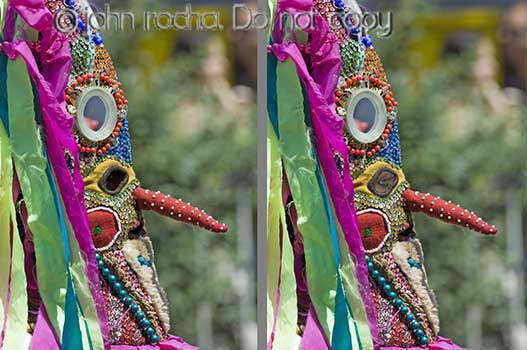 Masked Dancer – before and After

There will be people who will shout ‘foul!’ This may be so but at the very least this type of manipulation pre-dates the digital era.