The Rotunda of St Marija Assunta 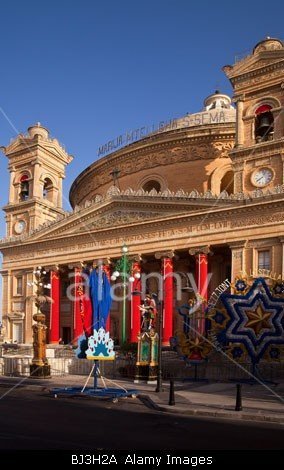 The Rotunda of St Marija Assunta (The Assumption of the Virgin Mary), in Mosta, Malta decorated  for the 15th August Festival.

The Rotunda of St Marija Assunta (The Assumption of the Virgin Mary), the Mosta Dome, was built in the 19th century.

It was designed by the Maltese architect Giorgio Grognet.

Its dome is among the largest in the world, with a diameter of 37 meters (122ft).

The rotunda dome is the third-largest church dome in Europe and the ninth largest in the world.

Grongnet’s plans were based on the Pantheon in Rome.

The feast of Saint Mary the Assumption takes place on the 15th August in Mosta, Malta.

(The people of Mosta built this temple to the Virgin Mary carried into heaven.)

If you want to use this photo of  the Rotunda of St Marija Assunta, go to Alamy.

August is perhaps not the best time to visit Malta as it’s very hot.

I wanted especially to see the festival of St Marija Assunta so I had no choice.

I took this photo early in the morning for a number of reasons.

The lighting appealed to me.

Malta is a crowded island but this early there were very few people around.

From the stock photography point of view, people are a problem.

They may add local colour and improve the composition but, in principle, you should try to get a model release from each one.

This is often impractical so the solution is to have no people or people carefully selected and willing to sign the release.

Normally I would use a tripod for a shot like this but mine had just developed a fault.

Luckily the good level of lighting meant I could hand hold steadily and I also supported my Canon 5D Mark 11 on a nearby lamp post.

I used the wide end of my standard walkabout lens, 28-75mm Tamron SP