The Old Weavers House In Canterbury 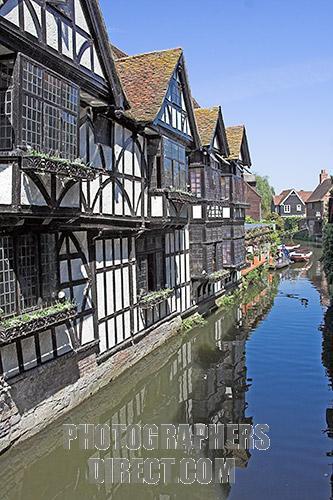 The The Old Weavers House was originally three separate buildings dating from 1507.

It is named after the Flemish and Huguenot weavers who fled from France to escape religious persecution in the 16th and 17th centuries.

The Old Weavers House stands on the river Stour and is currently used as a restaurant.

If you want to use this photo of the Old Weavers House, go to Photographers Direct.

The Old Weavers House is quite a challenge photographically.

The modern city has grown around it and the location is very cramped.

Much of the time the building is in deep shadow either because the sun has moved round or because the wall opposite and out of picture provides deep shade.

The building itself is separated from the street by an iron railing.

These facts mean that timing is important for the light and that there are very few positions where The Old Weavers House can be viewed as a whole.

My solution was to use a wide angle lens poked through the railings – too narrow to allow the lens hood unfortunately.

The railings provided good support for the camera.