Temple Of Antoninus And Faustina 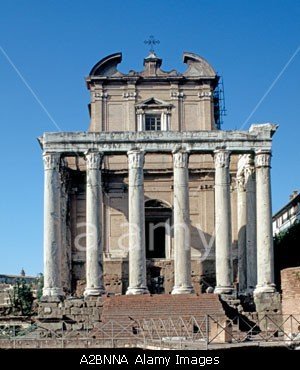 Temple Of Antoninus And Faustina In The Forum In Rome, Italy

This large Temple Of Antoninus And Faustina was erected by Antoninus Pius in memory of his dead and deified wife Faustina.

If you want to use this photo of Temple Of Antoninus And Faustina go to Alamy.

My objective was to produce a detailed picture of the facade of the Temple Of Antoninus And Faustina.

This kind of photo works best if it’s sharp and in focus.

To help with this I used my Slik Monopod.

Still, It’s a good illustration of how working with a digital image can involve a change in working practices.

As a 100% film photographer I’d have had some options assuming I wanted to avoid converging verticals.

I could have used a tilt and shift lens.

I could have kept the camera straight, looked for interesting foreground detail and used a wide angle lens.

I could have used a very long lens and gone so far away that the shot would look pretty square.

Using a wide angle lens would result in the building filling only half the frame.

To overcome this I might have used a medium format camera so that half a frame would still provide a good quality image.

With digital things are different because you can straighten things up later in the computer.

Size still matters though because if you know you’re going to straighten the picture later it’s best not to crop tightly as the straightening process will probably cut off part of the image.

Also, straightening digitally will mean that some of the picture will be interpolated which might mean a quality loss.

As so often in photography it’s a swings and roundabout situation where different choices are possible.