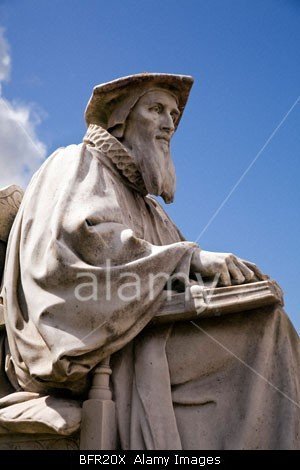 Statue of Richard Hooker in front of the Cathedral, Exeter, Devon, England

Richard Hooker (1554 – 1600) was an Anglican priest and an influential theologian.

If you want to use this photo of Richard Hooker, go to Alamy.

Photographing statues like this one presents a number of challenges.

I’m very keen to avoid messy backgrounds which means either throwing the background out of focus or finding an even toned background.

Usually I want to get the whole of the statue sharp so using very wide apertures is not an option.

For this picture I decided to go for the sky as background.

This means shooting from a low angle.

If you do this near the statue you’re going to tilt the camera and get a strong foreshortening effect.

This may have artistic possibilities but it wasn’t what I wanted.

This statue of Richard Hooker has reasonable space around it and I was able to shoot at a reasonable distance using my 75-300 Canon IS zoom.

With skies like this there are a number of points to watch for:

Look out for cloud formations which might have an effect on the composition.

Also, skies like this will show up any sensor dust so may need some cloning or spotting later.