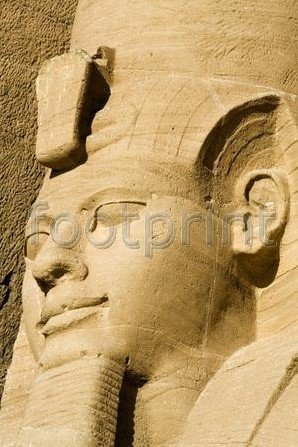 Statue of Pharaoh Rameses II dating from the the 13th century BC at Abu Simbel, Egypt

The great archeological site of Abu Simbel was built during the reign of Pharaoh Rameses II in the 13th century BC as a monument to him and his wife Nefertiti.

It was relocated onto an artificial hill in the 1960s to avoid it being submerged by the artificial Lake Nasser.

This picture shows a detail of one of the four statues of Rameses 11.

The statues depict him moving from youth to age and this is the first and youngest image.

In it he is wearing the double crown of Lower and Upper Egypt.

If you want to use this picture, click here for Footprint

For many, many years I have wanted to go to Egypt.

I’ve been lucky enough to have seen some of the world’s most famous and not so famous sights but I felt that seeing the ruins of Ancient Egypt was a must.

I was not disappointed.

For this picture I decided to concentrate on close-up detail.

As I was at quite a distance I chose my 70-300 zoom at the long end and made sure that the Image Stabilization was turned on to help me handhold without shake.

As the light was good I was able to keep a fast shutter speed.