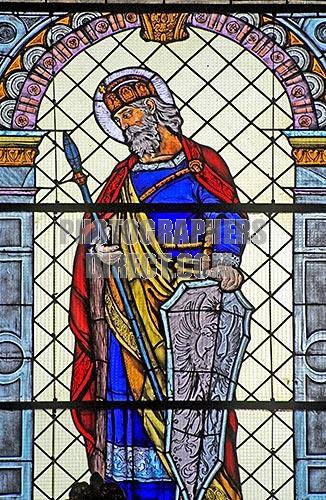 Saint Stephen’s Basilica or cathedral is named after Stephen the first king of Hungary 975-1038.

His mummified fist is kept in the reliquary.

The delay was caused as the original dome collapsed.

It is built in a neoclassical style with the ground plan of a Greek cross.

The basilica is the tallest building in Budapest and there is a lift and stairs to the top with fine panoramic views of the city.

If you want to use this photo of  Saint Henry, go to Photographers Direct.

It’s a truism to say that Budapest in Hungary is one of the most picturesque and beautiful cities in Europe.

Saint Stephen’s Basilica is one of the many fine buildings in the city.

From the photographic point of view the first thing is to establish if photography is permitted.

These days religious buildings have all sorts of different policies many including banning photography altogether.

At first I thought Saint Stephen’s Basilica was one of these.

Then I looked closer and saw it only banned flash photography.

Here is a dilemma.

I support the huge mass interest in photography that digital capture has brought.

Unfortunately many amateurs use cameras with flash on all the time.

This causes trouble where flash is banned.

I just hope that people can learn to turn their flash off otherwise many venues may move to an all out ban.

There’s plenty of available light in the Basilica and I was able to take many plenty of pictures.

The most obvious is that you’re taking a photo with transmitted light.

I’ve found that it’s best to select a time when the lighting outside is diffused or at least make sure the sun is not coming directly through the window to create glare and hotspots.

Exposure can be a problem – especially avoiding blown highlights.

This is where digital scores. As the subject is not moving you can try several different exposures and check the screen and the histogram until you get it right.

Another reason for keeping a distance is to prevent too much keystoning or other distortions.

With shots like this I try not to crop too tightly because I know I’m going to correct the distortions on the computer later and this sometimes means losing a bit of image at the edges.

Sharpness is vital so if I’m going handheld I use a fast shutters speed which is quite easy with transmitted light.

In this case I was able to use one of the great pillars in the Basilica as a camera support.

As the window was not completely parallel to the film plane I needed to use a small enough aperture to cover the depth of field.

As I wanted sharpness I didn’t want to stop down so far as to cause diffraction issues.

So basically I was looking at an optimum aperture for sharpness at about f8 or f11, the fastest shutter speed possible while keeping to 100 ISO.