Dragon Screen Wall in the Behai Park in Beijing, China

This is just to show how I managed to wait long enough to get a clear view of the wall. But I had to crop it fairly tightly still.

OK, let’s find out how to rub out the people you don’t like.

Let’s get back to a Stroll in the Park.

two variations of a digital photograph a “Stroll in the Park”

One of the great things about digital imaging is that there are so many new approaches to solving problems and if one doesn’t work you can try another.

As I said in my last post, you often can’t wait until there are no people in your picture. So here’s another approach:

Take a series of pictures which are basically the same except that the people have moved on.

(There’s a ‘right’ way of doing this which is to put the camera on a solid tripod, set manual exposure, and use a cable or remote release to trigger the shutter. This will ensure that all the main elements of your scene are accurately aligned.)

In this case I took the pictures handheld.

The idea is to replace elements from one picture with some from the other until you have the perfect composite.

This will need some computer manipulation and just to emphasize that any programme with layers will do I’m going to use my Photoshop Elements version 2.

First of all, I’ll have to open both the pictures.

When I’ve opened them I’ll want to see them both together on the screen and so I’ll choose the tile option.

Then I’ll choose the move icon so that I can copy one picture over the other.

If I drag the move tool with my mouse over the second picture while holding down the SHIFT key, the pictures should align perfectly on two separate layers.

The cursor changes to show I’ve copied the image and can release the SHIFT key. 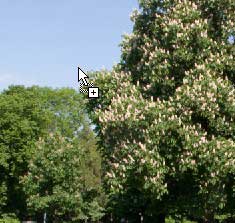 Voila! I now have my two pictures on two separate layers. 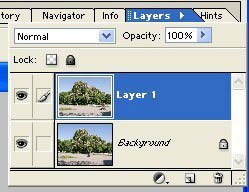 Now I have the pictures in position and I’m ready to get on with recreating the single composite.

One way of doing this will be in the next post.

2 Responses to Rub Out the People You Don’t Like. Part 1