Plus ça change – The New Lenin? 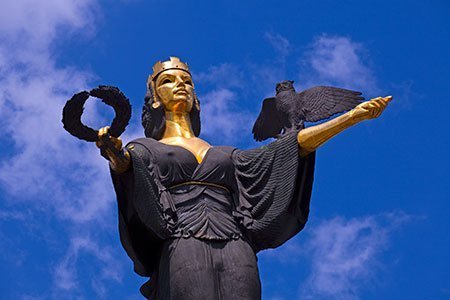 The Statue of Sofia.

Some years ago a statue of Lenin faced the facade of the Communist Party headquarters in central Sofia.

That building now houses administrative offices for the new parliamentarians.

And there’s a new statue.

This statue often called Saint Sofia dates from 2001 and was designed and built by Georgi Chapkanov and Stanislav Konstantinov. its tall pillar is symbolic of new growth.

And here is the cause of the new controversy.

There are probably people who prefer Lenin.

There are certainly people who just don’t like the statue.

And then there’s the church.

The Orthodox church objects to the popular name of Saint Sofia.

There was of course, a Saint Sofia.

However this statue is clearly in female form and adorned with pagan symbols.

Photo Comments:
😉 >>
This is the sort of image that from a stock photographer’s point of view needs to be taken again and again,

As the seasons change, the statue weathers and the light varies, each image is different.

This means that potential buyers have the choice of many different images.

I first photographed this statue with an 8.5 megapixel camera.

I couldn’t be too far away because building works and tram lines get in the way.

I focussed carefully on the nearest eye and used a small aperture for greater depth of field as I wanted the whole statue sharp.

For this shot I got some support from the surrounding building works.