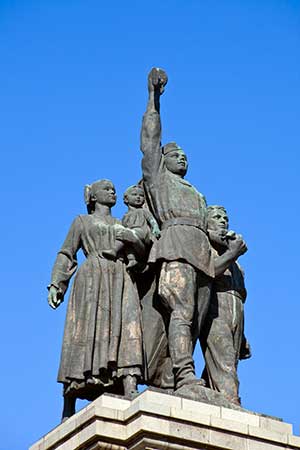 Monument to the Russian Army in Central Sofia

This famous monument to the Russian Army is one of the sights in Central Sofia in Bulgaria.

Photo Comments:
😕 >>
When Sam Cooke penned A Change is Gonna Come he well knew that things were changing all about him.

Sometimes it’s not so clear.

Bulgaria’s close relationship with Russia predates the Russian Revolution and the Warsaw Pact.

They have a common bond of Religion, Alphabet and a related language.

Perhaps most crucial of all it was Russian forces allied with the Bulgarian patriots who finally defeated the army of the Ottoman Empire and ended 500 years of Turkish occupation.

The Great powers of the Christian West stood idly by.

So where is the change?

Well, when politicians get involved in the writing or rewriting of history is it cynical to be suspicious?

There are those who see this monument as an ignominious sign of subservience while others argue that building the new metro line underneath has endangered the structure.

Some want it just torn down while others offer a new location.

Others, of course, want it to remain in place.

The debate is on.

Still, when I lived in China in the 1980s there were always rumours that that the Portrait of Mao Zedong in Tian An Men Square would never return after being cleaned.

As far as I know it’s still there.

This grouping of a family and a soldier is high upon a pillar and it’s not always easy to predict the lighting.

I wanted to make sure that there would be no shadows blocking the baby’s face.

This meant rising early in the morning.

Given the distance i had to use the long end of my 75-300mm Canon Zoom.

I used a Benro Traveller tripod, and mirror lockup to prevent shake.

I used live-view with manual focussing.

There seems to be no advanced search feature.

It accepted my search phrase and returned over 3000 results.

Only the first three were relevant.

One was for my original article, one for my blog post and one for an unacknowledged article as before.

Once again someone had used my article but had removed my contact details.

There was no reference to legitimate uses.