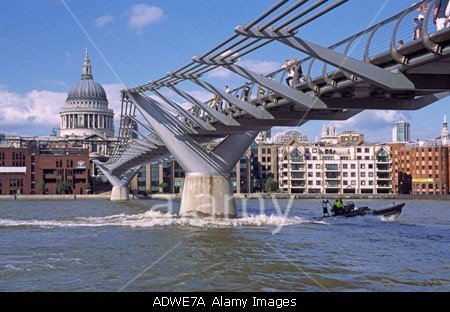 There was a time, a few hundred years ago, when Londoners saw their great city all destroyed.

The Great Fire of London blazed its way through the city and the great medieval cathedral was no more.

Old St Pauls was begun in the reign of William the Conqueror and no doubt many people thought it would stand on Ludgate Hill for ever.

And so to today. Sir Christopher Wren’s huge Baroque construction stands in its place – and seems just as much a fixture.

The cathedral is more or less the same as it has always been but more or less quietly a new London is springing up around it. For Sir Christopher Wren read Sir Norman Foster – both united in knighthood.

Perhaps monuments to mammon rather than in praise of God.

It is, of course, possible to find a view of Saint Paul’s which is more or less unchanged, but this is almost perverse.

As a stock photographer, it’s important to document the change and the obvious difference is the Millenium Bridge across the Thames.

For this photo I wanted both the bridge and the cathedral.

Using a wide angle lens gets both buildings “in” but more importantly the apparent perspective emphasises the bridge.

It demonstrates the nature of the adage that the camera cannot lie.

As the scene was relatively static apart from the slight movement of the water I waited for some action, in this case a boat with its engine churning up the water to provide some contrast to the “timeless” scene.

I suppose unless there is some mishap our grandchildren will look upon the bridge and the cathedral is part of the same familiar view.

According to my Ezine Articles statistics, my most popular article is about using a tripod.

There are three official copies on websites around the world.

My procedure here is to:

Choose a phrase from my article

See if there are any signs of pagiarism, re-writes or unattributed material.

The phrase I chose to search on was:

Using a tripod meant that I could set my camera to aperture priority, set the smallest aperture for super sharp pictures and then get the greatest depth of field

My thinking was that this text could not come from another article.

Would the search engines accept it and what would they find?