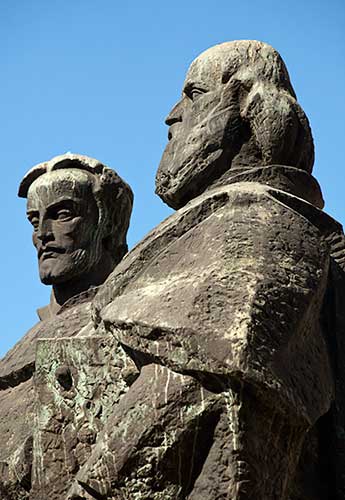 Statue of Saints Cyril and Methodius.

This statue of the originators of the Cyrillic Alphabet, the brothers Saints Cyril and Methodius stands outside the National Library in Sofia in Bulgaria.

Photo Comments:
😕 >>
Why is change important to a photographer?

Purely as a stock photographer it’s important to provide up to date images of the world.

It’s a shame if a travel guide has pictures of buildings which have been destroyed or doesn’t have pictures of the latest changes.

I feel, as a photographer, a duty to record the changes in the environment in which I live.

Sometimes the changes creep up gradually, sometimes they appear suddenly.

Sometimes people are trying to change history by destroying monuments, sometimes they are just building Malls.

And of course from the stock photography point of view a photographer making a record of where he or she lives is able to supply pictures which can never be captured by a short term visitor taking a chance on the weather or the time of year.

Sometimes the change is not entirely pictorial.

The imposing statue of Cyril and Methodius stands outside the National Library and seems ageless.

But what about the Cyrillic Alphabet?

Well, for me it’s bizarre.

Every day more and more information in the public street is written not just using the Latin Characters but increasingly in English.

A casual visitor might think that Bulgarians or at least those of the capital city were fluent in English.

They would be wrong – the young learn English with varying degrees of success but the older people speak only Bulgarian sometimes with Russian.

The statue and the library are located just off Sofia’s longest road, Tsarigradsko Shosse – Tsarigrad is the traditional name for Istanbul.

But wait, I live on the same long street.

Twenty years ago in the last days of the late lamented (by some and not others) Socialist regime I lived on Lenin Boulevard, one day I woke up to find I was on Trakia Boulevard and now I’m on the way to Istanbul.

So, some things (never) change.

I decided to conduct a small experiment – what would I find searching for my articles on Search Engines.

I chose a number of English language Search Engines.

and then two more: Scroogle and the oddly named DuckDuckGo.

Just for fun I threw in the Indian based Rediff.