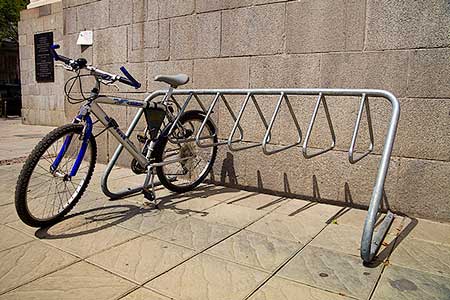 A Bicycle Parked outside the Law Courts in Sofia, Bulgaria

Gradually, almost by stealth, the city is changing.

Last time I passed the Law Courts with their grand steps and imposing lions, all looked as before.

Either there were no bicycles parked or I didn’t notice them.

I like the vision of lawyers arriving on bicycles – but alas it is not so.

No point in pretending that Sofia is the new Amsterdam.

Far from it. The motor car rules. Smog and noise are the order of the day and any cyclist who takes to the city streets needs to be determined, brave, or foolhardy depending on your point of view.

Still the change is there slowly. The city council has marked cycle paths – soon smudged away and shared with pedestrians.

My hope is for almost all the city to be pedestrianised and walking and cycling the order of the day but perhaps not in my time.

For this photo I chose a low position, a wide angle and a small aperture as I wanted all over sharpness rather than to exploit any shallow depth of field.

So, my plan was try some searches for my articles.

I chose DuckDuckGo to start with as it is a new search engine with an emphasis on privacy.

I am determined to avoid search engines that collect data if I can.

My search phrase was:

Using a tripod meant that I could set my camera to aperture priority, set the smallest aperture for super sharp pictures and then get the greatest depth of field

A phrase from my most popular article called, “Time To Take Your Tripod”.

DuckDuckGo has no Advanced Search feature and would not accept the whole phrase.

I got three relevant results including a reference to my original Ezine article.

I glanced at the articles and immediately saw that all references to me, my site or Ezine Articles had been left off.

Clearly the idea is deprive me of any backlinks or publicity.

No-one else claimed to be the author.

But things got worse:

My carefully measured, grammatical and scintillating prose (sic.) was mangled.

Here is a brief extract from the first article:

“consider this series is approximately super sharp photographs which means a low ISO setting for low noise and a rapidly shutter speed for no shake. A time ago I used to be in the famous Stone Forest near Beloslav in Bulgaria.”

It’s clearly my article – but almost as if someone has pushed the button on Google translate into some exotic oriental language and then back into “English”.

It took me back over forty years when, as an undergraduate, I had to read an article by Jean Paul Sartre in English – but for some reason taken from a German version.

So what about the second article:

The theorize why a tripod is so beneficial for creative photography is that it has two basic functions: The first, and most obvious, is to keep your camera steady. Any way someone else function is so that you can considered position your camera for the best mixture and focus.

My obvious puzzlement is why would anyone go to all this trouble to steal free?

What’s the point of filling a website with gibberish when you could include authoritative, well written articles without cost.

All I ask is that people have a chance to look at my site.

Now one more point is that DuckDuckGo failed to find any legitimate examples of my articles on the web.

Perhaps another search engine will get better results.

I’ll try them in the coming weeks.