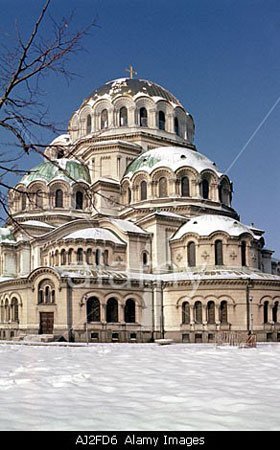 The Alexander Nevsky Memorial Cathedral Church in Sofia has been a good seller for me.

It’s one of the most famous buildings in the Balkans and it’s best to try to get a slightly different image.

I’m in the happy position that I live within easy walking distance of this fine building and so I can photograph it in all seasons by day and by night, in outline and in detail.

As Stock Photography is partly a numbers game it means I can easily build up a large set of different images of this great church.

The general economic climate and the various changes in the stock photo industry mean that I’m going to write a slightly different blog than I meant to, but I still think that I’m on theme.

It’s for you to judge.

Those of you who have followed my blog for some time will have seen that the link I used to have to Photoshelter has gone because Photoshelter, at least as a stock photo agency, is no more.

I received the news the other day from Alamy, as an Alamy contributor, that Alamy are reducing the photographer’s percentage.

The reason they give is to generate more money to break into the United States market.

And if we look at the USA market, what is happening?

Corbis is still there. Luckily, it seems to have great financial backing but as far as I know, is not exactly a money spinner.

Getty, the big player – its business model so much criticized by Photoshelter, has taken over Jupiter images for a mere $96 m dollars.

Now $96 m. dollars may not be small change to you and me but it seems that somewhere there’s money to be made in the stock photo business.

And only yesterday Digital Railroad posted on their site:

To our valued Members and Partners:

We deeply regret to inform you that Digital Railroad (DRR) has shut down.

On October 15th we reported that the company had reduced its staff and was aggressively pursuing additional financing and/or a strategic partner. Unfortunately, those efforts were unsuccessful. Therefore Digital Railroad has been forced to close all operations.

Digital Railroad has attracted a loyal set of customers and partners, and we regret this unfortunate outcome. Without sufficient long-term financial support, the business had become unsustainable.

Thank you for allowing us to serve the photographic community these past few years.”

So what’s to be done?

Well I have some ideas and just for the moment I’m going to continue with getting your photos on the web which might be even more important in these troubled times.

Interestingly enough I recently revisited Dan Heller’s site and found some interesting comments there which reinforce the point I made about photographers and web designers:

“If you get beyond your own technical skills or interests, then you might want to outsource the job to a web designer. But buyer beware: this path comes with some risks”

I suggest you read his comments here

Now I’m not going to suggest to everyone that you do what Dan did and learn everything yourself  but I do still want to emphasize that however much you want to work with an expert professional like a web-designer, it’s still a good idea to have some idea of how to do things, if only to ask the right questions.

You’ll see that this Blog is hosted on WordPress.

It’s taken me a long time and lot of thinking to make this decision, and things are changing all the time.

I’ll comment on my reasons for choosing a blogging platform and some other online matters in my next post.

By the way, so far my images have been straightforward stock photos but I do try to explore other outlets for sales and so for the next few blogs I’m going to showcase some of my photos available for sale on ImageKind.