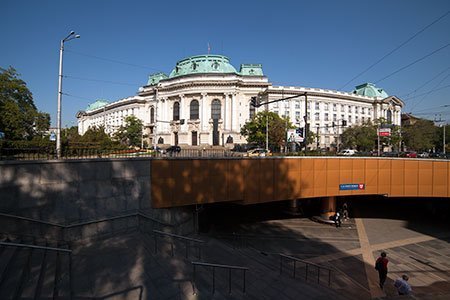 Sofia University “Saint Climent of Ohrid” is Bulgaria’s foremost traditional university and the view has lately changed with the addition of a metro station.

Photo Comments:
😛 >>
Some time ago I bought a Samyang 14mm wide angle lens to use with my full frame Canon 5D Mark 11.

I had a number of reasons for this:

My previous wide angle provision was 28mm and I wanted something similar to the 17mm wide angle I used on film in my pre-digital days.

I had a look at offerings from Sigma and Canon but in the end went for the Samyang.

Not only is it a lot cheaper but I prefer, when I can to use fixed focal length lenses. My experience of zoom lenses is that they’re less good at their shortest/longest settings.

Another reason was that I was looking for a dual purpose lens – one that would still be wide on a crop sensor camera. This more or less ruled out some of the Canon offerings.

Of course there’s the quality question.

Subject matter at the edges and corners is often extremely close to the camera. Tilt a bit and you’ll have your feet in.

Of course this is not a general purpose lens and so another aspect is price – this is a manual focus lens and it’s relatively inexpensive.

What about the quality?

Well I read a few reviews first and some of the conclusions were pretty startling:

Most reviews were positive emphasising the high resolution.

The most negative review I read was by Ken Rockwell. Perhaps, as he said, it might have been a sampling problem.

I was most impressed by the DxO optics result which scored the camera lens combination with a high 28 points.

In practice there are lots of things to think about:

One point for me is that in the past I usually used a square Bronica as my main camera.

This meant that I had no problems choosing vertical or horizontal formats and also the increased film area meant that I could compose very loosely with plenty of free space in my pictures – the cropping came after.

Now it’s a bit different but with a full frame camera and 21 megapixels to play with the situation’s a little similar in that cropping to 18 or even 12 megapixels leaves plenty of quality and the equivalent of a 17-20mm lens.

Anyway, it’s early days but this lens certainly give me a chance to take superwide pictures.

For this photo I used liveview to give me accurate focus and rested my camera on one of the station railings.

As this lens is manual I find the best idea is set my camera to aperture priority.

After manually stopping the lens down the camera selects the appropriate shutter speed.

If I don’t like it after checking the histogram I can compensate manually.