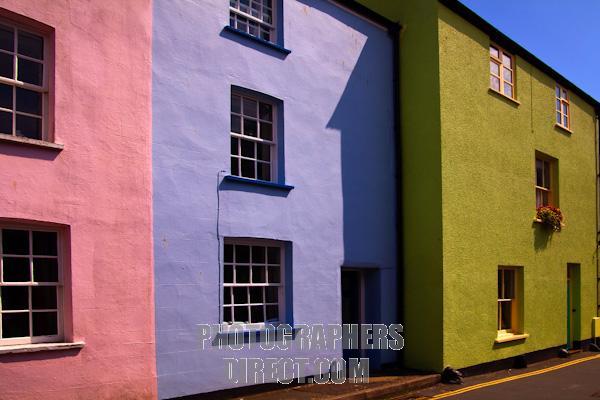 A row of terrace houses in Lyme Regis in Dorset, England.

If you want to buy a print, card or poster of the houses, go to Photographers Direct.

Photo Comments:
😐 >>
Many years ago I determined not to take a certain type of stockphoto – you know the type – people pretending to be business workers or medical personnel.

Lots of photos cutout from backgrounds just waiting to be dropped into some other image.

I don’t know if these images make the photographers lots of money but I have an idea of taking photos that I like without neglecting the market.

The point here is that this photo is of some houses in a suburban street.

It has clear content but that’s no reason not to look for at least some of the components of a great picture, composition, colour, texture and so on.

As far as the composition is concerned my first idea was to take the houses head on. I had already picked out some details of windows, shutters etc.

But the street was narrow and using the wide end of my 28-75mm Tamron walkabout lens I could only include one house.

Perhaps I could have taken a few separate photos and stitched them together.

Still I finally chose to look down the street looking for a hint of a vanishing point.

No need to be over literal about how many houses in the row.

Of course what caught my eye was the colours.

It’s not all that easy to find a whole row of brightly coloured houses so I feel the photo records something quite unusual.

Like many photographers I’m concerned about the way photographs have become a commodity.