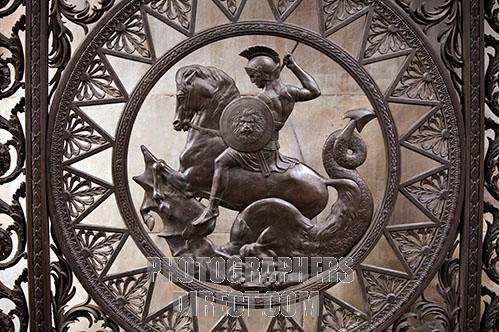 Metal gates in Marble Arch London by Samuel Parker in 1828.

The gates show the lion of England , the cypher of George IV , and the figure of St . George and the Dragon.

If you want to use this photo of Marble Arch ironwork, go to Photographers Direct.
😕 >>
Photo Comments:

One of the perennial problems of travel photography is that you can’t always choose exactly where you are at the right place and the right time.

This time I had decided to stay in Central London for a few days to give myself a decent chance of choosing.

I strolled down to Marble Arch early in the morning setting out at about 6 am.

Still, it was obvious nothing was going to work if I wanted an iconic view.

The light was flat and lifeless, the sky was grey and muddy.

Well, with all buildings you have a choice of choosing details as well as a full view.

And with famous landmarks it’s perhaps best to look beyond the standard view anyway.

As I walked around and under the arch I was really taken by the superb ironwork of the open gates.

The light levels were not very good and I was travelling light without a tripod or even a monopod.

Luckily the archway and the ironwork provided me with a good substitute and I was able to steady my Canon 5D Mark 11 and Tamron 28-80 SP zoom, my favourite walkaround lens.

Even when there’s plenty of support for the camera it’s easy to shake or nudge it.

I hoped that one or more of the pictures would have a good result.

I was right – or lucky – and obtained some sharp and detailed results in both horizontal and vertical formats.