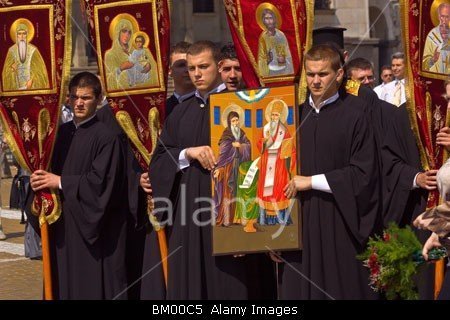 This procession starts from the statue of Cyril and Methodius outside the National Library and ends at the Alexander Nevsky Memorial Cathedral Church.

Bulgarian Education and Culture and Slavonic Literature Day commonly know as Cyril And Methodius Day or Alphabet Day is celebrated on May 24th in Bulgaria.

Cyril and Methodius recognized as saints by both the Eastern Orthodox and Roman Catholic churches have given their names to the Cyrillic Alphabet widely used in Slavic countries including Bulgarian and Russia.

If you want to use this picture of the Alphabet Day procession go to Alamy.

Photo Comments:
>> 😐
Here in Sofia it looks like Spring is coming at last.

For me that makes it Festival time.

Sure there’s Christmas but through spring and summer there’ll be loads of festivals around the world.

Festivals are a staple for stock photographers but this photo illustrates some of the obvious problems.

First you have to be there – this may be obvious but it needs careful planning and helps if you have reliable information – it can mean a lot of waiting around.

There’s nothing to be done about the weather – it’s all very well saying that the best photos are taken in the early morning and late evening but that may not be the time the organizer’s plan.

Here, for example, the lighting is pretty harsh.

It’s important to avoid blown out highlights but it’s also vital to get detail in the shadows.

With a photo like this you can’t really use reflectors or fill in flash.

You can’t bracket either.

With this sort of contrasty lighting I think shooting RAW is really the way to go. A RAW file has so much more information than a jpeg.

Then there are the legal problems:

There are lots of people in this picture – there’s no way I can think of to get model releases from all them or indeed any of them!

This means that the photo is going to have a limited editorial or news market.

Still as a photographer I love to take photos of the festivals where I live as they give some insight into some of the social cultural aspects of the country.

And I love to time my travel in other countries for festivals because it means the locals are likely to be out and about in a good mood and there are great photo opportunities.

Backup Plan – is it time to get off the ground?

So to recap: a good backup plan needs to have at least these components:

safe copies of the photos and a safe place to keep them:

Optical disks can scratch and deteriorate over time.  You have to check them and make backups of the backups.

Hard drives may crash one day.

It seems that the answer is obvious:

Most of us have got used to online services like email and now so many people are extolling the benefit of moving everything online – even coining an expression to go with, we’re all supposed to go into the ‘cloud’.

But is this the answer?