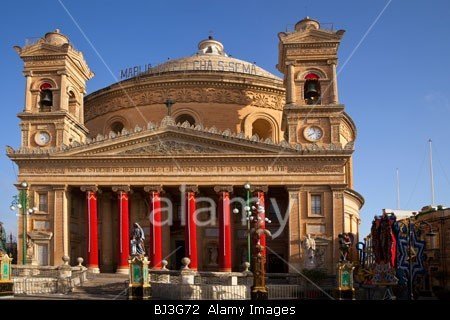 The Rotunda of St Marija Assunta (The Assumption of the Virgin Mary), in Mosta, Malta decorated for the 15th August Festival

The Rotunda of St Marija Assunta , the Mosta Dome, was built in the 19th century.

It was designed by the Maltese architect Giorgio Grognet.

Its dome is among the largest in the world, with a diameter of 37 meters (122ft).

The rotunda dome is the third-largest church dome in Europe and the ninth largest in the world.

Grongnet’s plans were based on the Pantheon in Rome.

The feast of Saint Mary the Assumption takes place on the 15th August in Mosta, Malta.

The legend on the church reads VIRGINI SYDERIBUS RESTITUTAE T. H. MUSTENSES F. F (The people of Mosta built this temple to the Virgin Mary carried into heaven.)

If you want to use this photo of the Rotunda, go to Alamy.

Photo Comments:
😐 >>
As I commented before, Malta in the middle of August is hot and the light is clear and harsh.

I had a couple of ideas in mind when I took this picture.

I wanted to make sure there were no people in the picture.

This is not only because I wanted the church to be the dominant subject but because people are a problem in stock photography.

If you have people in a picture, it’s really better to have a model release.

This is not essential for editorial use but it’s still another problem.

How can this be done?

One way is to wait patiently and take the picture when there are no people.

This is more or less impossible in a busy street.

Another way is to take the picture when there are few people around.

For this picture I got up early in the morning and took the picture as soon as the light was right.

One point is that Christian churches are orientated to standard patterns with a “West Front” – this makes the lighting patterns more predictable.

I was looking for a ‘record’ photo here without extreme pseudo perspective effects.

For this picture I found the 28mm setting on my Tamron 28-75 SP zoom provided a wide enough angle on my full frame Canon 5D Mark 11.

While I have no particular preference for full frame digital cameras, it is easier for a photographer like me brought up with traditional 35mm film cameras if I can use the same lenses and see my pictures as I always have done.

My Photos from Fotomoto:

Fotomoto is an innovative shopping cart system for photographers:

If you like my work and want to support my site why not order one of pictures suitably framed.

Lots of people have no idea how wonderful a top quality photo looks when it is professionally printed and framed.

Believe me, it brings a lot of pleasure.

But back to Fotomoto.

I’m finally getting my act together with Fotomoto.

In the early days Fotomoto was cumbersome.

It was almost impossible to select the pictures for sale and exclude pictures not for sale.

All that has changed so if you’re a photographer looking for a way to sell your pictures: Try Fotomoto.

They have great support.

Every time I’ve had a problem with Fotomoto I’ve received prompt and helpful advice. (Thanks Derek).

One more service is eCards.

If you like my pictures you can send free eCards to your friends.

If you’re interested in buying a print or cards or sending a free eCard, click the BUY PHOTO ART link in the site menu.