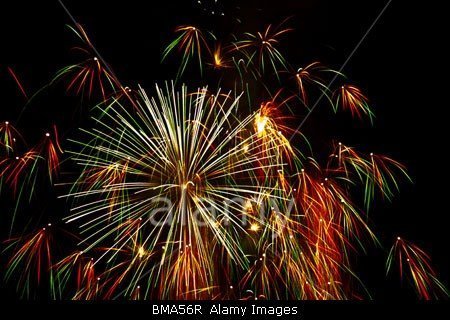 All week there’s preparation for a grand firework display on the 15th of August in Mosta, in Malta.

If you want to use this photo of a fireworks in Mosta, go to Alamy.

One problem is that about 30 years ago I had the privilege of being invited to the National Day celebrations in Beijing in China.

Of course, the Chinese are great at fireworks and I’ve never seen a display to match that one again.

Still, the display in Mosta is pretty impressive.

There are quite a few challenges in photographing fireworks.

Still, you can get away with quite a few exposure values.

My own view is that this is a situation where shooting in RAW is worthwhile.

Then there’s the problem of composing:

You can’t actually see everything clearly as the fireworks expand before your eyes and there’s no way you can be sure of how big the light trails will be.

Seems to me that it’s best not to compose too tightly.

Also you have to decide if you want to capture just one firework burst or many.

I’ve often tried the technique of using a long exposure with a piece of  black card to cover the lens in between bursts.

One problem is that the displays often take place when it’s really dark so it’s not possible to get much of an image from the sky.

Anyway, with digital photography you can shoot as many images as you like without needing to change the film.

This is definitely a situation for some support. I prefer to use a tripod and a remote release.

Obviously you want to be in full control of timing so it I don’t mess around with mirror lockup or self timer.

If you’re like me you’ll find that there aren’t many keepers from hundreds of shots and I’m always left with that feeling that I’ll do even better next time.

From a stock photo point of view, as there are no people and the image is not spectacularly unique, I offer it as a Royalty Free image.