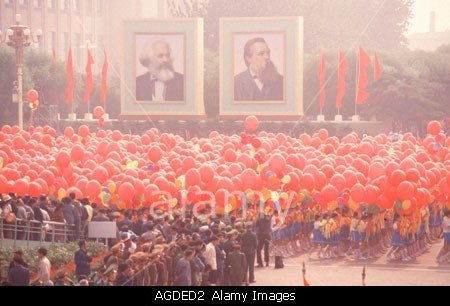 Karl Marx and Freidrich Engels feature in this National Day parade in Beijing.

All over the country there are celebrations to celebrate the founding of the Peoples Republic.

The biggest celebrations are in Tian an Men Square in Beijing.
Well choreographed groups of children, soldiers and citizens go through their routines and in the evening, the firework displays begin.

If you want to use this photo of Chinese national Day, go to Alamy.

Photo Comments:
😐 >>
There are many approaches to stock photography.

My own preference is to take photos which will have a long life in sales terms.

It’s many years since I lived and travelled in China but my pictures continue to sell.

The square has a somewhat sinister reputation in the west but for the citizens of Beijing it is a place of recreation. Kite flying is a popular pastime and underneath the square I have enjoyed time with my Chinese friends in ice cream parlours in summer and Mongolian Hot Pot restaurants in winter.

I was lucky to be one of the half a million people invited to the celebration and this gave me a good vantage point.

For this shot I used a film Camera – a Konica SLR which I still have today.

This was one of the first cameras with a built in motorwind which I found useful in these circumstances.

When the time came to convert my slides to digital files I used a Minolta scanner.