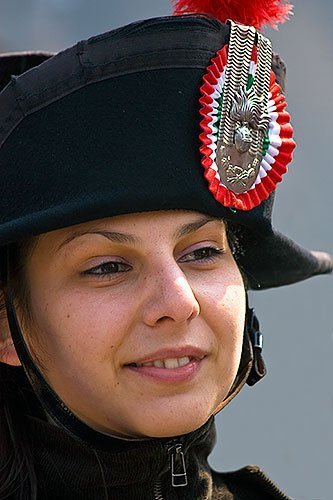 The Day of the Bulgarian Army which is also Saint George’s Day is on May 6th.

The Bulgarian Armed forces parade in the Square outside the old Royal Palace and then march down the famous yellow road towards the Alexander Nevsky Memorial Cathedral Church.

Though it’s a parade of military might it’s a pretty lighthearted occasion.

Once the parade is over the soldiers mingle with the civilian population and pose for group and family photos.

Now that Bulgaria is a member of the European Union and NATO there are many foreign forces at the parade.

Here a young woman has borrowed a helmet from a friendly Italian officer and is enjoying herself in the international atmosphere.

If you want to use this photo of a girl wearing an Italian helmet, go to Alamy.

Photo Comments:
😐 >>
There are several approaches to taking pictures in a crowd.

It’s possible to use a wide angle lens and get in among the people.

This time I chose to use a 75-300 mm telephoto zoom lens so that I could frame accurately from a fixed position and isolate the subject.

Backup in the cloud.

It’s difficult to decide on the best way to backup files in the cloud.

No good to backup to a service that is unreliable and goes out of business.

My approach is to look for some free services to try out first.

I’ve had some bad experiences: poor uploading, changing policies and so on.

For some time now I’ve been trying out a service called ADrive which offers 50GB of storage free.

This is no good for mass photo storage but a photographer still needs backup of documents, image files and so on.

My own view is that I’ll never be willing to put my bank or credit card details online but it’s worth trying with less sensitive documents.

This still leaves the problem of where to keep loads of RAW, tif or psd files.