Detail of statue of Emperor Trajan 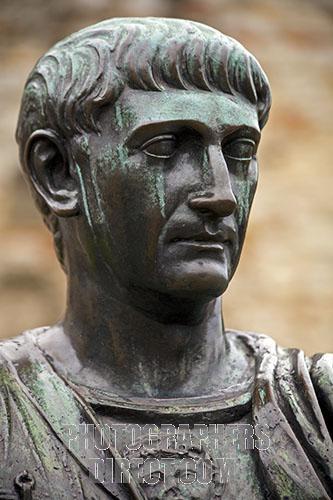 Detail of statue of Emperor Trajan

Detail of a statue thought to be of the Emperor Trajan on the Roman London Wall , London , England.

If you want to use this photo of the Emperor Trajan, go to PhotographersDirect.

I was attracted to this fine statue on the London Wall and decided to photograph it full length and in detail.

I was particularly pleased that the lighting was diffused rather than bright sunshine which is much too harsh for portraits – even of statues.

(Statues have the advantage that the eyes stay open even in bright sunshine.)

I was looking to separate the head from the background by controlling the depth of field.

I also wanted to keep a reasonable distance to keep the features of the face, eyes nose and ears, in proportion while avoiding shooting upwards from near the statue.

For these reasons I decided a telephoto lens was best and used my 75-300 Canon IS zoom.

A study like this needs to be sharp with very careful focus on the nearest eye and I used both auto and manual focus to get this right and used the image stabilization to avoid any camera shake.

As I’ve pointed out before even the best photos are no good if they can’t be found.

Full many a flower is born to blush unseen,
And waste its sweetness on the desert air

is true for photos too.

This is why keywording is so important.

Here are the the keywords I found:

There is an amount of repetition here but it shows the difficulty of keywording for different agencies.