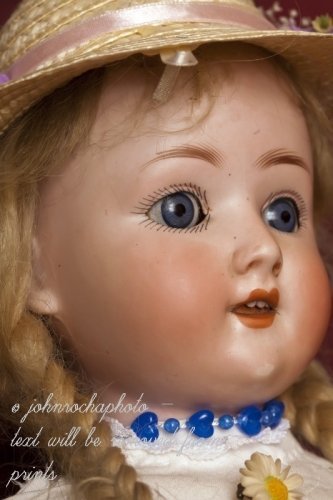 Daisy is a fine example of a collectable Bisque Head Doll.
If you want to buy a print, card or poster of Daisy, go to Photobox.

Daisy is a Bisque Head doll. The word bisque refers to the unfired Biscuit Mix material that the head is made of.

Dolls of this type are valuable today and highly sought after, though fakes abound.

From the photographic point of view I took this photo because:

There is a niche market for collectables of all types.

Many people collect dolls not only for their age or intrinsic value but because they have a certain charm.

At the moment I’m writing a series of articles about taking super sharp photos. These articles are not illustrated though I hope to produce an illustrated version in epub and PDF formats.

The specific point I was looking at was correct focussing and a close up portrait like this one of a doll or a person illustrates some of the problems.

To be specific, in a conventional portrait it usual to stress that the eyes should be in sharp focus.

If the eyes are not at the same distance then the nearest eye should be sharp.

Given modern cameras and their autofocussing mechanisms how is this to be achieved?

A further consideration is that as the doll is much smaller than an human, the Depth of Field is going to be even shallower.

One point that is of help is that the doll can be kept perfectly still.

For this shot I decided to use a 100mm macro lens as I needed to keep a natural perspective, focus closely and felt that a large aperture lens would be helpful for accurate focussing.

I often use window light for portraiture and prefer a diffused or overcast day as brilliant sunshine can introduce harsh shadows and contrasts.

As the doll would not be moving I could use a slow shutter speed.

I positioned my Canon 5D Mark 11 on my Benro traveller tripod and took some test exposures checking the histogram until I had the fullest tonal range without burning the highlights out.

For the final exposure I set the camera to self timer/remote with mirror lockup to prevent any camera shake and used a remote control to trigger the camera.

As far as focussing was concerned, this is the type of situation where Liveview comes into its own.

I was able to frame the photo accurately and use manual focus with extreme precision.

The key points are that with Liveview, you can focus on the precise part of the subject that you choose, in this case the nearest eye, and use up to 10x magnification.

As window light is still somewhat directional, I used a gold diffuser to fill in the shadows.

So there it is, an accurately framed, sharply focussed photo.