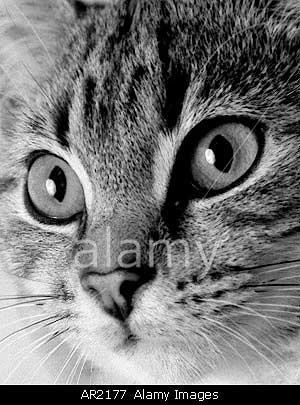 This is a close up portrait of a black and white tabby cat in England.
If you want to use this photo of a cat, go to Alamy.

Photo Comments:
😀 >>
I’m posting this photo to emphasise a couple of points from my article “Make your photos super sharp part 5 – using lenses.

There’s no point in having even the best lenses if you don’t use them properly.

There are problems in focussing and framing:

Clearly a focal point of a photo like this is the eyes.

However, as the head is tilted the eyes are not in the same plane and so it is not possible to focus on both of them.

As the Depth of Field is very shallow, only one eye can be rendered sharply and as here, it is usually the nearer eye that has to be sharp.

As the eye is off centre framing tightly and using the central focussing spot will not do the job and neither eye will be sharp.

There are a number of approaches to this which include:

Using the central focussing spot over the nearer eye and then reframing.

Using manual focus and carefully focussing on the nearer eye.

If you are using a medium format camera or have plenty of megapixels, another approach is to step back a little and use the central focussing aid or autofocus spot to select the nearer eye.

This will result in poor composition but the bonus is that the photo can be cropped later using suitable software and a landscape or portrait crop is possible.

For this particular photo I used a medium format film camera and scanned and cropped it afterwards..