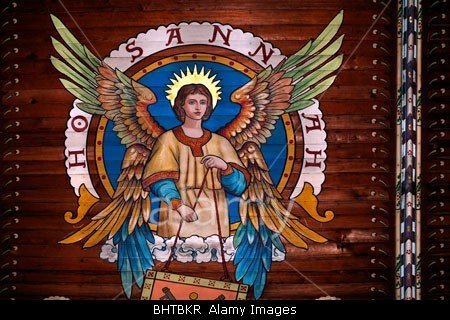 An angel painted on the medieval ceiling of Saint Peter’s Church in Thanet, Kent, England.

If you want to use this photo of an angel,  go to Alamy.

I rarely use on camera flash and I’m particularly dubious about the flash equipment built into so many DSLRs these days.

I do understand that they have their uses.

However, the nave of this church was dark and I wanted to highlight the craftsmanship and the colour of the ceiling paintings and this angel in particular.

One of the features (or lack of) with this camera is that it doesn’t have a built in flash.

I used my Canon Speedlight 430x in the hotshoe.

The reasons for this were to:

One other thing I took care over was to shoot at a slight angle so as to avoid a hotspot reflection from the flash.

As the surface of the painting of the angel was flat and not too shiny I was reasonably satisfied with the result.