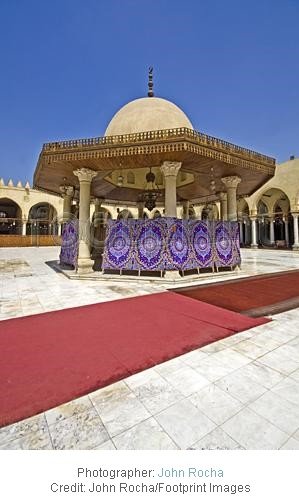 The location for the mosque was the site of the tent of the commander of the conquering army, general Amr ibn al-As.

One corner of the mosque contains the tomb of his son, Abdullah.

Due to extensive reconstruction over the centuries, nothing of the original building remains, but the rebuilt Mosque is a prominent landmark, and can be seen in what today is known as “Old Cairo”.

It is an active mosque with a devout congregation, and when prayers are not taking place, it is also open to visitors and tourists

If you want to use this photo of the Amr Ibn El-Aas mosque courtyard , go to Footprint.

Egypt is a magical land in many ways and I found it full of photographic highlights.

One point to make is that it’s important to repect the Islamic religion which is followed by many of the people.

That said I found Egypt a photo friendly country with friendly citizens and no harassment from the police or officials.

As the first mosque in Africa the Amr El-Aas mosque is an iconic building.

The mosque courtyard is impressive but in order to capture the main area I decided on a wide angle view and used my Sigma wide zoom which is pretty sharp in the corners if stopped down.

Although the mosque courtyard floor is paved with tiles which give detail I decided to include the red carpet for extra foreground interest.

The bright light meant that I was able to shoot hand held with both a fast shutter speed and a small aperture helping me to get a sharp image with maximum depth of field.

In my experience there are two main approaches to Keywording.

The first is the unaided method – you look at the picture and think of suitable keywords.

Perhaps this works for some people but I soon run out of ideas and of course, to work well you have to put yourself in the mind of potential picture buyers and understand some of the potential pitfalls.

Of course you have to take account of plurals, different spelling systems (theatre/theater), false positives – the term Iceland Poppy might attract people looking for the country or the flower and some objects have all sorts of different descriptions such as a flash drive/pendrive/thumbdrive/memorystick and so on.

The second approach involves getting help.

The most basic is seeing what your agency advises – Alamy have a fairly comprehensive account which applies mainly to their site.

You can see what other photographers and agencies think though of course you can easily run into plagiarism and copyright problems.

There are a number of internet sites which suggest keywords or approaches to keywording and of course there are software packages to help you.

If you want you can outsource the whole business at a price.

Anyway keywording is crucial to stockphotography.

I’d like to know what you think about keywording and I’ll give an account of my current approach in future posts.