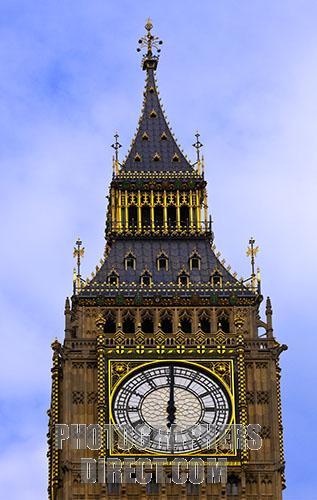 The Big Ben clock is claimed to be the largest four faced chiming clock in the world.

The Big Ben clock and dials were designed by Augustus Pugin.

If you want to use this photo of Big Ben go to Photographers Direct.

I waited some time to take this photograph of Big Ben.

I especially wanted to take it at six o’clock.

When the chance came I decided to take a close up using my Canon 5D Mark II and the 75-300mm zoom.

As there were some convenient railing I turned the image stabilization off to use the railings as a support to prevent camera shake.

Every post on this site shows one of my Editorial or Stock Photos with details and comments:

Still, I know some people like to view a few photos together.

So, I’ve introduced a slide show type portfolio of 100 photos.

Now, I don’t like those slide shows where you have no choice so I’ve used the simpleviewer plugin which gives you thumbnails you can choose.

Hope you enjoy the photos.

This feature has been replaced by my picture galleries.